Photographers know the power of black and white paired together and designers do too. The simplicity of white cabinets paired with black accents is tranquil, inviting and elegant.

Whether it’s 1-piece white cabinet doors paired with black quartz countertops for a sleek modern look, all black cabinets with white countertops and backsplash for a dramatic, luxurious feel, or classic, 50’s diner-style white shaker cabinets paired with black and white checkered floors and pops of red accents, there are scores of ways to beautifully pair black and white for a sophisticated interior.

Burrows Cabinets has 3 shades of white in our Faceframe line including our crisp, pure Frost white, classic, neutral Bone white and warm, creamy Crema off-white, as well as a beautiful, pure white woodgrain called Luxe in our EVRGRN engineered wood line. Our Beech Rye is the perfect black stain to pair with white countertops, backsplash and accents.

Because cabinets can be a major undertaking to change out, home buyers typically take painstaking efforts to select a cabinet material, door style and color that reflects current trends and remains timeless in appeal. Burrows Cabinets designs and curates material and cabinet style offerings with these same priorities in mind.

We’ve done the work of attending kitchen and bath industry trade shows, scouring hundreds of websites, reading trade and consumer publications, listing to and watching industry experts make trend predictions, and we’ve studied historical trends to understand what makes a design timeless in appeal. We pair this information with decades of industry experience on what holds up well over time, and the desire to create a kitchen and bath offering our customers will be proud to offer buyers, and one buyers will be excited to see when designing their new space.

To showcase our color options, we’ve created color wheels for our different product lines as well as easy to navigate product pages for our EVRGRN frameless cabinet line and our faceframe line to create a quick comparison between our door styles and color options. Designers use color wheels to compare color shades and hues and we’ve found that buyers like to see how colors compare to each other in hue, how light/dark they are and for stained wood, how different woodgrains compare.

We’ve done the research for you. These colors are on trend but not trendy. They’re beautiful and will remain beautiful over time if taken care of properly and not abused. These are the colors and materials of dream kitchens!

Driftwood gray combines the beauty of natural wood with a perfect gray stain, and is available on Alder, Maple, Beech and Hickory. The differences in the underlying wood color and grain change the look of the finished cabinets, from the warmth of Driftwood on Alder and cool gray of Driftwood on Maple to the rustic look of Driftwood on Hickory.

Check out the Driftwood photo gallery to see our Driftwood gray stain on a wide variety of cabinets for interior design inspiration.

Layering textures and using different shades of the same color can make a room more calming, inviting and interesting.

Google searches for farmhouse and rustic Scandinavian design and kitchens have made a meteoric rise over the past few years and are at the top of many buyers’ wish lists. There’s a new design term rising in Google’s search results too and that is “urban farmhouse” design.

One of the most important ways to ensure your cabinets look beautiful for many years is to prevent your cabinets from exposure to moisture and excessive humidity. Damage from moisture can result in blushing of the topcoat, deterioration of the finish, or black stains in the wood. Moisture damage is easily minimized or even eliminated simply by being aware of certain items: 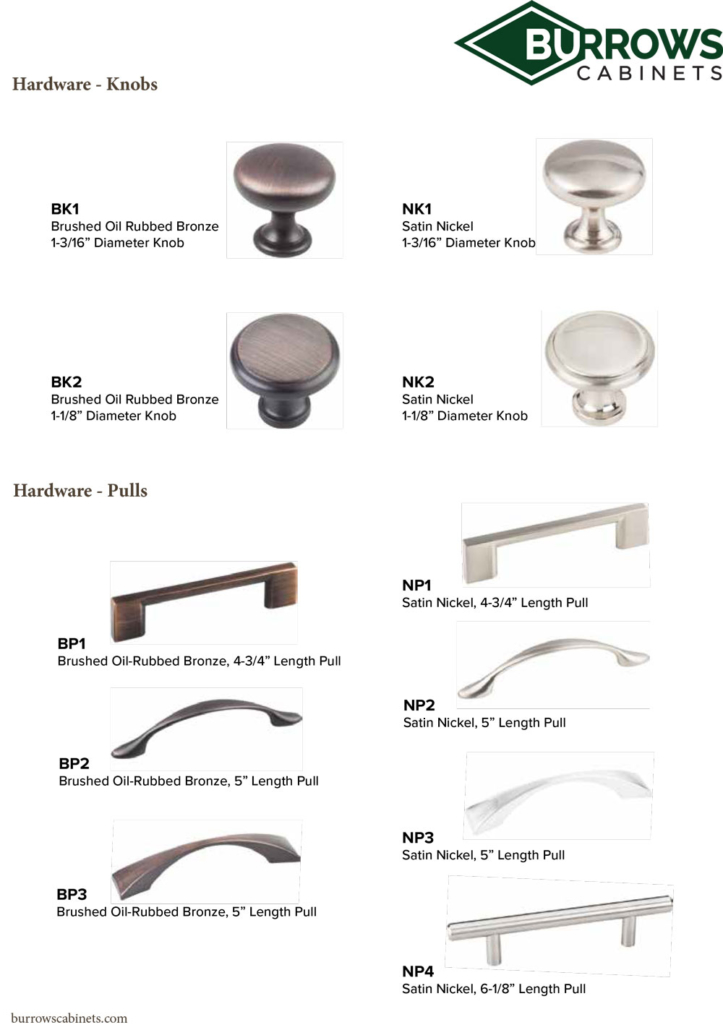 Burrows Cabinets door hardware options include the NP4, a versatile new 6-1/8″ Satin Nickel pull.  The NP4 pull is the perfect length for drawers and doors and works well with many different cabinet materials and designs and is a great fit for transitional or modern rooms. 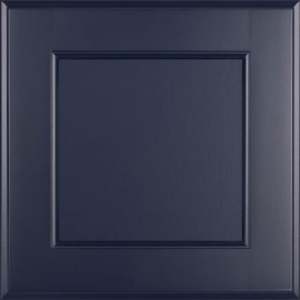 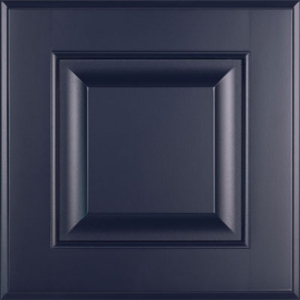 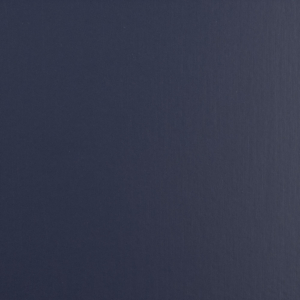 Whether you’re designing a space for clients with a traditional, vintage, minimal, rustic, global or timeless look, our new Naval paint option is the perfect, subtle infusion of color to tie a room together and create a sense of serenity and calm.
Naval is a neutral, dark navy blue and pairs well with cream, white, gray, tan and every wood tone from dark walnut to light maple. Naval also works as a background for pops of red, yellow, orange and green. Forbes says navy is the new black in kitchens and bathrooms.

According to Zillow, pairing a navy blue island with white perimeter cabinets can increase a home’s resale value by over $1500 and “pops of color – particularly in darker hues of blue” are becoming increasingly popular. Read the complete Zillow article here: https://bit.ly/2IaYUM4 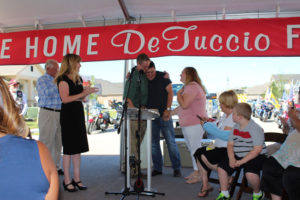 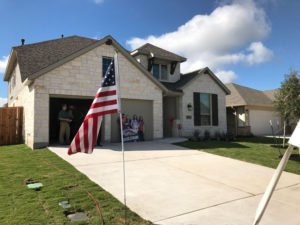 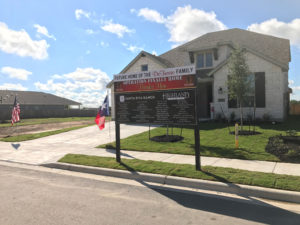 Burrows Cabinets was honored this year to be a part of our second “Operation Finally Home” build, creating a mortgage-free, new home for a very deserving military family. The home is located at Santa Rita Ranch in Liberty Hill and was built for Purple Heart recipient, U.S. Army Spc. David DeTuccio and his wife and four children. The DeTuccio’s received keys to their new, fully-furnished home June 29, 2017.

DeTuccio, joined the military in 2007, and in 2008  he was deployed to Baghdad, where his unit completed raids and extractions in the mountainous terrain. On Feb. 19, 2008, they were ambushed outside their compound. A rocket-propelled, improvised explosive device hit DeTuccio and he was taken to Balad Air Base trauma center where he underwent multiple surgeries and therapy.  DeTuccio suffered shrapnel wounds, severe PTSD, memory loss, headaches and seizures.

When asked what receiving this home will mean to his family during an interview with TexasSports.com, DeTuccio said,  “It will change our family lineage. When you don’t have an expense, such as a mortgage, you can spend that extra money on education. Now I feel I can ask my kids, ‘What do you want to be—a doctor, a lawyer—those now become possibilities.'”

The first Operation Finally Home build Burrows Cabinets was a part of was completed in Fall 2016 at Paloma Lake. The home was built for Nick and Shelby Nelms, who have two children, and who both suffered combat injuries when serving in Afghanistan. Nick is a combat medic and when the truck Shelby was riding in on a mission was hit by an improvised explosive device (IED), Nick was in another vehicle in the convoy. He ran to the truck Shelby was in and found her injured, and helped her to safety. Nick and Shelby were married later that year after returning to the USA. 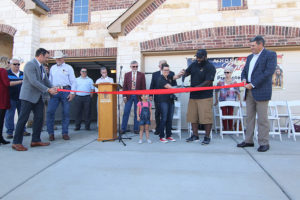 Burrows Cabinets is grateful for the privilege to be one of the many contractors, suppliers, donors and the community who contributed to honoring these military heroes and their families with mortgage-free, custom-built, beautiful homes, including custom cabinets throughout. We are grateful to our employees for your hard work and quality of craftsmanship on the products in these homes, and every home our products go into.

At Burrows Cabinets we’re focused on providing home builders with modern products and business solutions while maintaining the timeless, dependable craftsmanship that has defined our company since we began operations in 1971.

With these values in mind, we are pleased to introduce Burrows Cabinets’ new logo.

While our logo has changed, our priorities remain the same – making beautiful, environmentally-responsible custom cabinets and storage solutions using the finest materials and workmanship. We hope you join us in our excitement as we continue to grow and find new ways to deliver the products that set our companies apart.

Thank you for your business! We look forward to serving you. 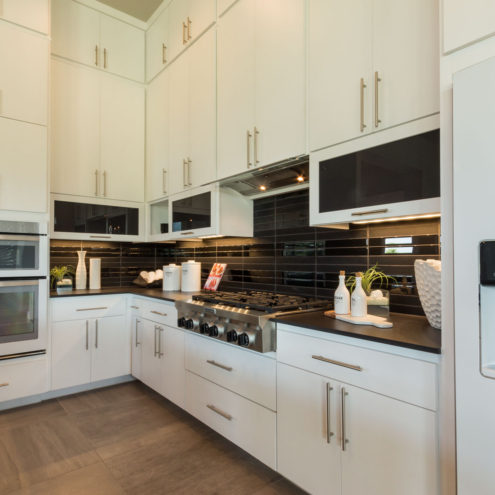 The modern look of full overlay cabinets is showing up increasingly on kitchen and bath magazine covers and is trending on Houzz. We’ve seen an increase in builders using full overlay construction in model homes lately as well.

Burrows Cabinets’ full overlay construction can be used to create a transitional or modern look while still providing the strength of face frame construction. 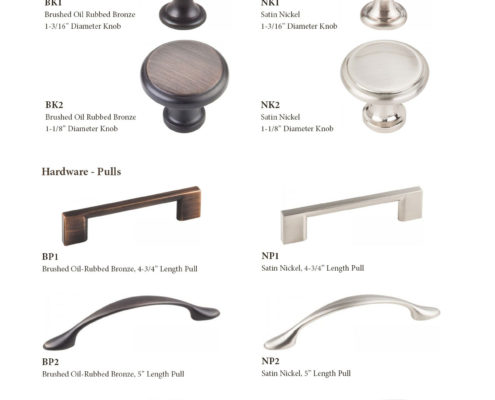 View our hardware selection by visiting our Knobs + Pulls web page on the Options tab.

Please join us at a home dedication for a very deserving military family,  taking place Thursday at 9:45 am at Santa Rita Ranch in Liberty Hill. We will be welcoming U.S. Army Spc. David DeTuccio and his family to their new home as a part of Operation Finally Home.

Operation Finally Home is a national, non-profit organization that brings together experienced home builders, suppliers, and supporters to build and then donate, mortgage-free homes to wounded, ill or injured veterans, surviving spouses and their families.

Burrows Cabinets was honored to be a part of our 2nd “Operation Finally Home” build this year. We are grateful for the privilege to be one of the many contractors, suppliers, donors and the community who contributed materials, equipment and labor to honor this military hero and his family with a mortgage-free, custom-built, beautiful home.

Words are not enough to express gratitude for the sacrifices made by our military personnel. To find out more about Operation Finally Home visit https://www.operationfinallyhome.org/

The trend this year has been towards the modern look and in particular, the appearance of floating, from hover boards, floating wedding cakes, TVs that appear to float on the wall, to our very own floating vanities and floating shelves.

Floating vanities and shelves provide an open look and clean lines, and the visual intrigue of the construction method makes a room more interesting.  Below are photos of our floating shelves and vanities for modern design inspiration. 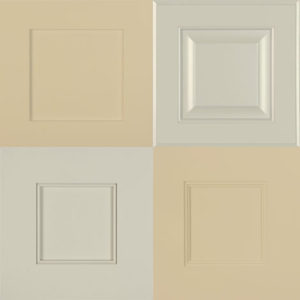 The top four paint brands, Behr, Benjamin Moore, Glidden and Sherwin Williams, picked their “Color of the Year” and forecasted paint color trends for the coming year, and all of them included neutral shades similar to our two new colors. Click on the paint company names to see their color trend picks.

Burrows Cabinets is celebrating 45 years in business this year!  From 1971 to 2016 Burrows Cabinets has been building custom cabinets and creating storage solutions for home builders in central Texas.  We are grateful for our amazing customers and we look forward to many years of continued service to all of the best new-home builders in the business! 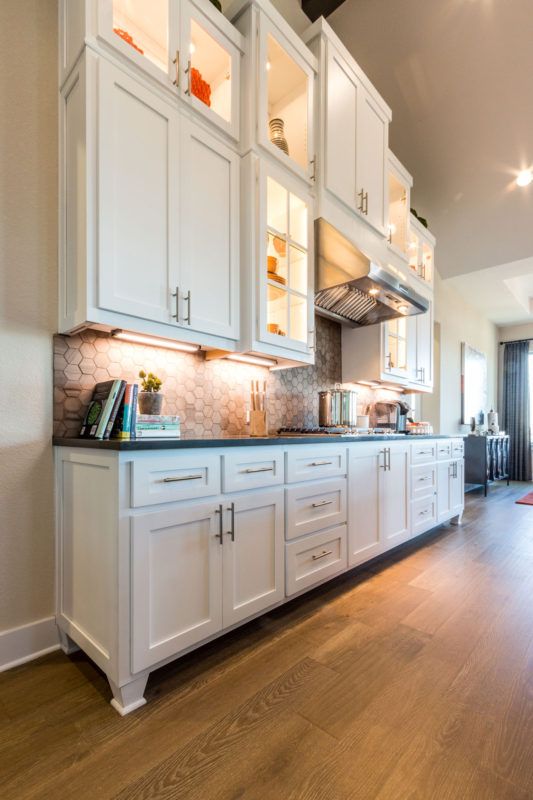 Congratulations to the home builders who have taken the procedural steps to install their prefinished cabinets after trim, paint and tile to help mitigate trade damage and avoid post-installation cabinet restoration. We’re excited about the success we’ve had so far with fewer call backs for restoration when cabinets are installed later in the building process, and we know the end result is happier homeowners.

We recommend installing prefinished cabinets after trim and paint at a minimum, and ideally after tile, as well as taking measures to prevent post-installation damage.
Trying to restore cabinetry to its original beauty after damage during paint, trim and flooring installation results in a product with visible touch-up, and the end result is reduced customer satisfaction.
Call us today to discuss best practices for cabinet installation scheduling and trade damage abatement.
November 12, 2015/by oz
https://secureservercdn.net/166.62.112.199/p2g.300.myftpupload.com/wp-content/uploads/Kitchen-shaker-bone-drwr-4-web.jpg?time=1582561329 1253 1880 oz https://secureservercdn.net/166.62.112.199/p2g.300.myftpupload.com/wp-content/uploads/Burrows-cabinets-logo-diamond-web3.jpg oz2015-11-12 08:23:262017-06-28 09:38:29Happy Homeowners

After being introduced this spring, our new rich, brown Kona color has become a very popular choice for homeowners and we’ve gotten great feedback on the finished product!  Below is a gallery of different cabinet door styles and wood species in Kona as well as several finished end product photos that show the finished product in the home for design inspiration. 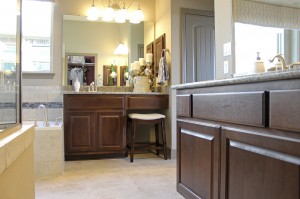 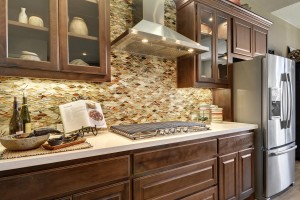 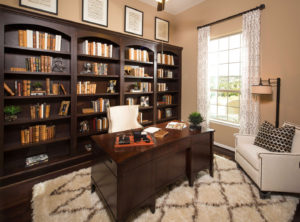 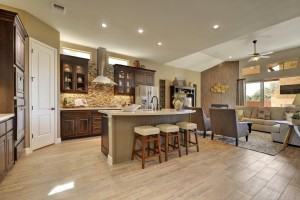 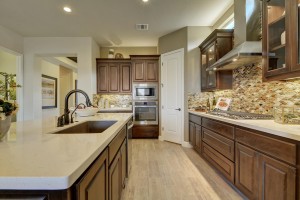 We renamed the Camley, Austonian and San Rafael styles because those names signified a specific design and color combination and we expanded the color options for these styles to our complete stain and paint color offering! The Camley/Austonian styles are now called Briscoe and the San Rafael is now called Terrazzo and all 37 color options are available for these two styles.

Our 5-piece door designs also include our new Wilmington and Kensington doors shown below as well as our classic Raised Panel, Flat Panel and Shaker styles.

Burrows Cabinets Wilmington in Beech Ambrose and Kensington in Frost